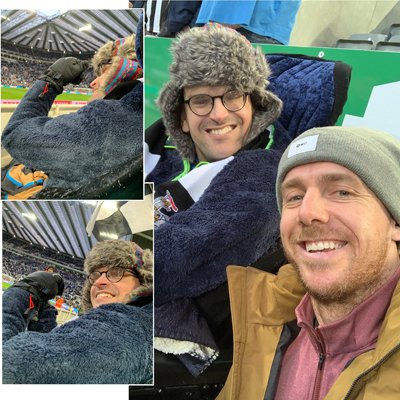 For one resident living at our Alan Shearer Specialist Residential home, nothing beats the excitement of going to see the Toon play at home.

Season ticket holder, Daniel, who has profound disabilities, has a seat next to the halfway line and can often be seen waving his arms whenever the ball comes near him.

Supporting Daniel during the match, home manager, Gareth, couldn’t help but wonder at this curious behaviour.

“I asked him why he waved,” said Gareth, “and he told me he was waving at Alan Shearer because he sometimes sees himself on camera during Match of the Day!”

Gareth provided support for Daniel during the entire match trip, making sure he didn’t miss out on his lucky match routine of enjoying a chicken pie, plenty of cups of tea and picking up a takeaway on the way home.

Not a bad day at the office, then, Gareth.